Common and Distinctive Features of Buddhism and Christianity 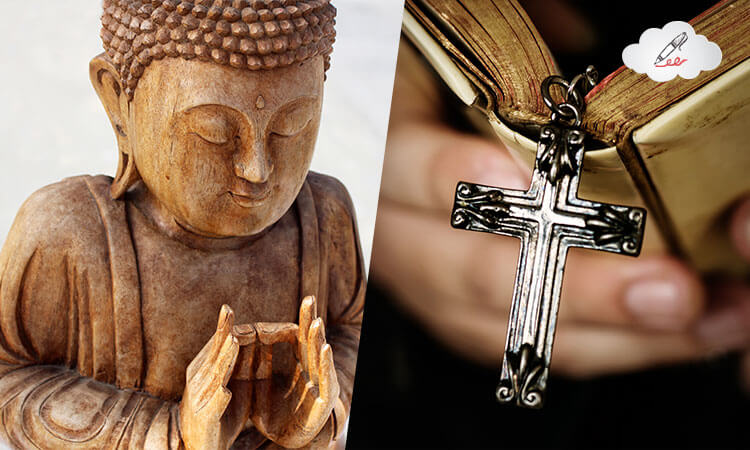 Buddhism and Christianity belong to world religions. This means that they are not limited to one ethnic group or one country, but are common among many peoples on several continents. How does Buddhism differ from Christianity, and do these religions have common features? This question is very interesting.

The History of Buddhism and Christianity

Buddhism appeared in the 6th century BC in India. The founder of the religion was Siddhartha Gautama, the son of a raja of one of the small Indian principalities. Later he became known as the Buddha. The difference between Buddhism and Christianity is that Christianity appeared much later (in the 1st century of our era). This religion is named after Jesus Christ, who preached a new faith in the territory where the state of Israel is located now. However, it is incorrect to speak of him as of the founder of this religion, since he was (from the point of view of Christians) the son of God (in different branches of Christianity this term is interpreted differently). The stories of the apostles about the life and deeds of Christ formed the basis of the Gospel, which is one of the books of the Bible.

Earn 10% from all orders made by people you bring!
Your people also get 17% discount for their first order

Comparison of Buddhism and Christianity

Considering the issue in detail, it can be stated that the differences between Buddhist and Christian doctrines are colossal. Rather, it would be truer to assert that there is practically nothing in common between them. Christianity, being one of the so-called Abrahamic religions, arose on the basis of the ancient Jewish religion – Judaism, and in the initial period of its history, it was considered by many people as one of the Jewish sects.

Hinduism served as the basis for Buddhism. It is the ancient Aryan religion. Hinduism and Judaism, which became the basis for the emergence of Buddhism and Christianity, respectively, dispute the right to be called the oldest of the existing religions. In the theology of Christianity and Buddhism, there is absolutely nothing that would unite them. Most researchers believe that Buddhism is not even a religion, but a philosophical and ethical tradition (philosophical doctrine).

Have you got any questions?

The Image of God in Buddhism and Christianity

In Buddhism, in contrast to Christianity, there is no concept of God. Buddha is only a man who has comprehended the Truth through meditation. The basis of Christianity is worshiping the Creator and following His commandments. Jesus is the son of God. Buddhists do not talk about the existence of God. They declare the existence of a certain single law of the universe. Having realized it by purification and self-improvement, a person becomes a Buddha and is freed from the succession of reincarnations (samsara). Buddhists, unlike Christians, reject any killing (even for food and protection). However, they do not forbid killing plants for food. Buddhism, formerly popular mainly in East Asia (China, Indochina, Japan, Nepal, India, and some other states), became widespread in Europe and North America in the second half of the last century.